Riot Act, Inc. presents our Annual Series of Short Plays September 15-18 at 7:30pm nightly in Riot Acts Studio 305 in the Center for the Arts. 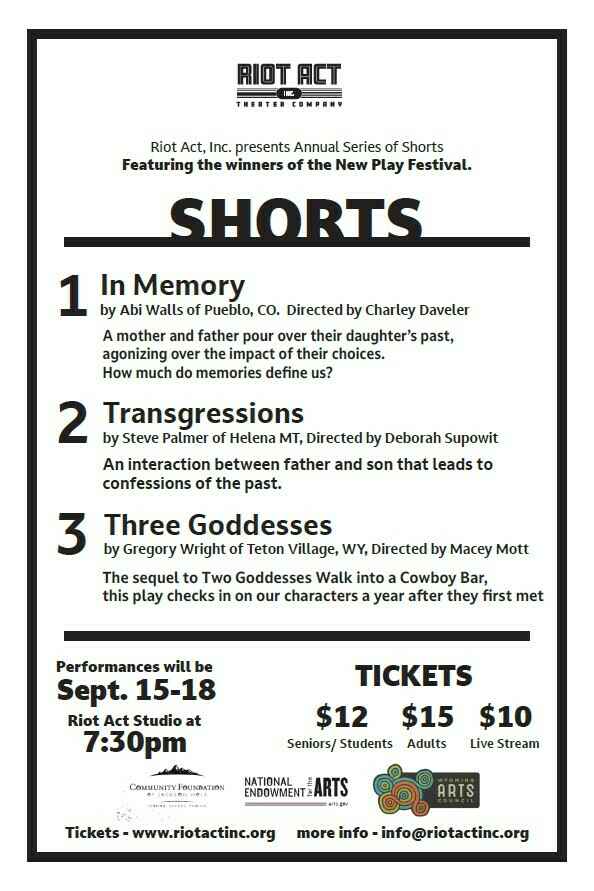 There are currently no tickets available for this event, but you can still make a donation.

Riot Act, Inc. presents our Annual Series of Short Plays September 15-18 at 7:30pm nightly in Riot Acts Studio 305 in the Center for the Arts.

Riot Act, Inc. is thrilled to present the winners of its Annual New Play Festival. Seven original works were submitted for the contest and judges ultimately selected three short plays to be produced as part of Riot Act’s Annual Series of Shorts. The first-place winner will receive $200 and the Marius P. Hanford IV Award. Marius was a longtime stage combat choreographer influential in several theater communities, including Jackson and New York. The second place will receive $100 and third place will be awarded $50.

#1 – In Memory by Abi Walls of Pueblo, CO. Directed by Charley Daveler.

A mother and father pour over their daughter’s past, agonizing over the impact of their choices. How much do memories define us?

#2 - Transgressions by Steve Palmer of MT. Directed by Deborah Supowit

A father and son share an intimate conversation. Is there someone else listening?

The sequel to Two Goddesses Walk Into a Cowboy Bar, this play checks in on our characters a year after their first meeting.

We will have a short intermission between each Short Play.

Special considerations for the pandemic

A very small live audience (20 people or less) will be admitted into the theater. Audience members are asked to wear a mask, socially distance, and use hand sanitizer. We also ask that audience members either provide proof of COVID vaccination or a negative COVID test taken within 72 hours of the performance they attend. Masks and sanitizer will be provided if you do not bring your own. Seating will be arranged to promote social distancing. The studio will be disinfected between performances.

Actors will be mask-less for their performances. Only the actors involved in a particular play will be allowed in the studio during the performance of their play. All crew members will wear masks and keep hands clean.

Tickets are available in advance at online at www.riotactinc.org or at the door. Tickets are $15 for adults, $12 for students/seniors. It will also be available as a Live Stream for you to watch at home for $10.

Riot Act, Inc. T-shirts and Stickers plus Concessions will be available before each performance and during intermission.

Short plays allow the audience to taste several small bites of theatre in one evening. Mature content, parental guidance is suggested. Please join us on the stage! For more information, contact info@riotactinc.org.

Hope to see you there!

*Project made possible by Your Old Bill’s donations.

You can support us by making a donation!